So, January was a bit of an odd month for me hobby-wise. On the one hand, I was either out of town or had company over for at least a week. Further, I was hit with some sort of nasty sickness which I would guess had a neutral effect on my hobby productivity – on the one hand, my productivity really decreased due to my illness, but on the other, there were a few days where I had to call in sick to work and was left at home with nothing to do but rest and paint models.

Anyways, I had finished some stuff off that had been on my shelf for a while, and started some new projects. I finished painting my Zerkova2 unit, completing her two bodyguards to fill out the unit. I also buckled down and finished my first pure display project in a while, my “black sheep” model that I had started on last year. In addition, I tried out a new scale with Reaper’s Yephima model, which turned out quite nicely. 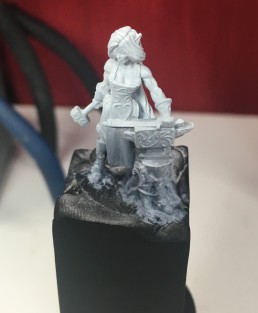 First up, I’ve got Laril Silverhand (03803) from Reaper, an elven blacksmith with an eye patch. This is one of their old metal models, and she comes with a sword, hammer, and an anvil resting upon a log. I really like her sculpt; instead of portraying her as a waifish elf lady, they’ve gone a bit more realistic route and gave her the sort of muscle tone that one might expect from a blacksmith (even an elven one). I’ve got her installed on a base similar to the one I made for my black sheep, only smaller as I’ve used the 25mm plinth instead of the 40mm. In order to practice some different lighting effects that I might want to use for some of my Scale75 Naughty Gears busts, I think I’m going to try to portray her as working late, perhaps on a moonlit night. My plan is to have her mostly painted as though she is in low-light conditions, but with some orange OSL emanating from the sword, emphasizing that she had just pulled it out of the furnace and it is still glowing brightly. 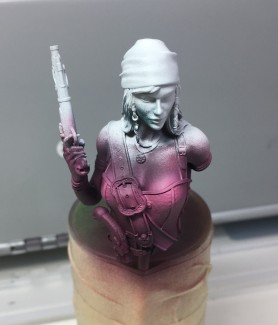 Next is my 1/12 scale Mary Read bust from Scale75. People who pledged to the kickstarter may remember that this was the one that there was some controversy over, and which Scale75 had to resculpt due to a copyright issue. The kit comes in a few pieces, with the gun at her waist, her right arm, the two little dreadlocks hanging down from the front of her face, and a parrot being separate pieces. There are two options for the right arm included in the kit with her holding either a gun or a piece of fruit. The parrot is designed to go on her right shoulder, but one has the option of leaving it off as well. And I’m sure if you don’t mind doing a little bit of sanding and filling, you can easily leave off any of the other little pieces. I decided to go with the gun, and I haven’t decided what to do with the parrot yet. I think she might look a little odd with both a gun at her waist and one in her hand, but two guns is pretty cool.

Anyways, aside from the parrot, I’ve gotten her all assembled and primed, and I managed to get some airbrushing in, despite a minor mishap involving a small part from my airbrush and my bathroom sink. My plan is to bring her to an IPMS build day on the weekend, so I wanted to get all the airbrushing done on her in advance so all I had left to do was brush painting.

When it came to choosing a colour scheme, I knew I wanted to do the gold filigree on her corset as shown in the studio scheme. I kind of wanted to go with purple, but I didn’t want to just copy the studio scheme, so I settled on a sanguine colour. Using P3 paints, I basecoated the entire corset with Coal Black from the airbrush, which I was going to use as a shadow colour. I then moved on up to Sanguine Base as my main colour, and highlighted with Sanguine Highlight. As a final highlight, I mixed in some Menoth White Highlight as recommended by the P3 colour charts. I’ll be brush painting her flesh tones, but I wanted to get this done with the airbrush to make it easier to place the highlights appropriately on the corset.

I’ve decided to take a little break from Warmachine for a variety of reasons, some of which have come to a head over the past couple weeks, but that doesn’t mean that I don’t still have some models on the shelf. I’m planning on going to the Southern Ontario Open this year, and aside from taking in as much hobby content as I can, I want to participate in their Champions tournament again. Champions requires a player to choose his or her warcasters/warlocks from the ADR list, so my choices are Sorscha1, Vlad3, Old Witch 2, and Kozlov. Sorscha1 was the first caster that I played regularly and you never forget your first, so she’s in my pairing for sure. Since I don’t have OW2, and I don’t have the models for a Vlad3 list, that leaves Kozlov as the other caster in my pairing. Since I want to do Kozlov in Armored Korps, that means I’ve got some Man-O-Wars to pull off the shelf of shame (where I keep my assembled, unpainted models) and get fully painted.

Right now, I have four Man-O-War models on my shelf; two Drakhuns, in both mounted and dismounted form. For these, I airbrushed the pink and purple, and am hand-painting the rest. I still have a lot of shading and highlights to do on both the dismounted ones, and the mounted ones are a little further behind. Also, for one of them, I picked up a couple Alexia2 heads from the Privateer Press bits store to do her unhelmented. It’s a bit of a slog because I’ve done another unit of MoW recently, but it will be nice to get them ready for both the Champions and the new goodies that will no doubt be released after the Armored Korps CID.

I also have a unit of pikemen along with Sofya Skirova started, but after getting them more than half done, I’ve kind of put them aside for now. I suspect it will still be a little while before I want to field a Legion of Steel list, and to be honest, I’ve kind of gotten tired of painting units. I’ll probably return to them after. Also on the back burner is Fenris, who I am doing a conversion on because I really do not like the original sculpt.

Finally, I did pick up some Farrow models, including Helga and some warbeasts for a journeyman league, however given that I’m taking a little break from Warmachine, I don’t see myself prioritizing them over the stuff on my shelf anytime soon.

I do have a box of the Necromunda House Escher models that are just begging to be assembled and painted. I’m not sure exactly what Necromunda is or how it works, and I’ve never done the GW thing before, but they look pretty badass so that’s a thing. In addition, I’ve got some kickstarter stuff and other orders coming to me that I’m pretty excited about, as well as more Khador than I can shake a stick at to paint. I think I’m pretty set for projects for a while, and February is looking good for some serious hobby progress…

…or was, until I fell down the stairs today and may have injured my hand. 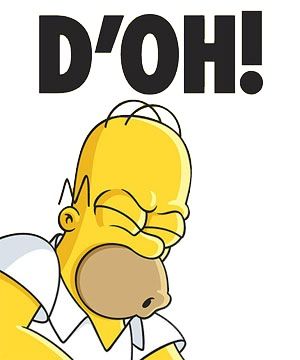