These are models that have been sitting on the shelf of shame for at least two years. I remember when I first got them, I quickly slapped three or so of them together, and did some conversion work on the other two, messing around with green stuff and alternate heads to add to the gender diversity of this unit. I also sculpted some snowball like things coming out of their hands to represent the magic spells that they cast. These were just paper clips with an extended teardrop shape sculpted in green stuff, then textured by dragging a hobby knife along the length of the item. Drill a hole in the hands, pop the paper clip in, and call it a day.

Then, they rested on my shelf for at least two years. When I resolved to clear off my shelf of shame (that is, my shelf where I put all my assembled but unpainted models), these guys were some of the last that I got to, mostly because I don’t really like painting cavalry, and partly because they don’t exactly fit my army tactics-wise.

When it came time to paint them, I decided to start by using the airbrush as much as I could to bang out the bulk of the actual horses, then paint the riders and details such as the saddles, harnesses, and mane with a brush. After applying black primer and a zenithal highlight, I got to work, initially starting with a mixture of a dark brown and Reaper’s Blue Liner, which is essentially a blue-black that seems to have been originally formulated for doing darklining on blue surfaces like the armour of a space marine. Of course, the blue was chosen over black because colour theory.

From there, I worked up to the  highlights, spraying from above and going from brown to a slightly reddish leather colour, and mixing in a touch of P3 Menoth White Highlight (one of my go-to off-whites) into the highest highlight. When I was satisfied with the horses, at least for a tabletop quality miniature that I wanted off my shelf and in my display case with the rest of my army, I moved on to brush painting everything else. Finally, I did bust out the airbrush again to do quick OSL effects on the magic spells and a couple other little things. I may have gone slightly overboard with the blue glow, but they’re spell-slinging cavalry, so who cares?

Honestly, some of the green stuff work is a little rough and there are a couple places where the paint was a little quick and dirty and my blends weren’t perfect, but it’s good enough for tabletop and it’s got me closer to having a completely empty shelf of shame. 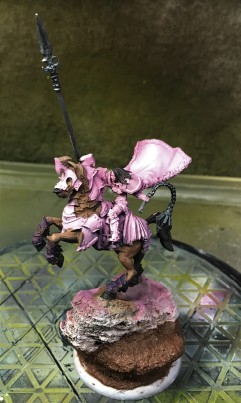 And, speaking of ill-conceived gender-bent cavalry models, I’ve decided to put my own spin on Vladimir Tzepesci, Great Prince of Umbrey (Vlad3) as well, kitbashing his horse and weaponry with Alexia’s body and head to make my own special version. The horse is basically stock, aside from some gap filling here and there.

As these were both metal models, this process involved a lot of filing to make Alexia fit on the horse designed for Vlad, and make sure that Vlad’s cape fits on her. It was a bit of a pain because cutting, filing and pinning metal models gets real obnoxious real fast. I did a little but of sculpting, using various epoxy putties to sculpt some transitions on places like the cape where the two pieces from two models not designed to ever go together met, and sculpted a cloth hanging down on one side of the saddle to cover up some rough areas where she didn’t quite fit that nicely on the horse. I also, of course, had to sculpt on some big shoulder pads because if there is one thing Vlad is notorious for, it’s oversized shoulder pads that put GW’s Space Marines to shame. I did keep it somewhat restrained though for both aesthetics and versimilitude, not that a model of someone riding a horse while simultaneously wielding a spear and a flail makes any sense on any level whatsoever. Finally, the weapons involved a lot of pinning with very tiny pins because they are small metal pieces that will break off if you breath on them the wrong way, and the shaft of the spear was replaced with a brass rod because leaving it in pewter is just asking for trouble.

In the end, between the reposing of the spear and the elevated base I constructed for this model, I think she is taller than a stock colossal. I know this is going to cause headaches if I ever bring her to a tournament, but that’s one thing that I almost never worry about. 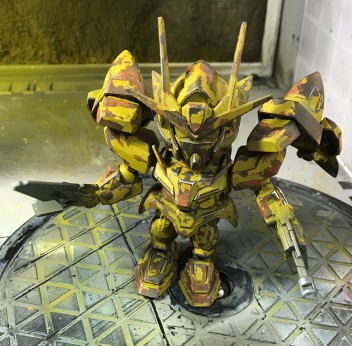 I’ve also started on an SD Gundam, which is basically the Toon Tank of the Gundam universe. I’ve decided that with the deformed, cutesy shape, it would be interesting to contrast that with lots of weathering. I’ve started off with the hairspray technique in two layers. After priming with Synylrez, I started with the metal and rust layer. I sprayed the entire model with Vallejo Metal Color Steel, then sprayed, stippled and dry-brushed some various tones of brown and orange on there. I varnished that, then picked out a colour that roughly resembles the yellow primer you see on planes and other military equipment from the Army Painter rack at my FLGS. After applying the varnish and chipping medium, I chipped away at it, trying to get about half of the primer off. The idea is that when I chip the top coat, some of the chips will show primer, while some of the chips will go all the way to the metal.

I haven’t quite decided what colours I will paint this in yet, though I’m leaning towards a green and khaki scheme. I’d like to really push the weathering; in addition to doing the double layer chipping for the first time and using my usual techniques of sponging and painting on scratches, I was thinking of trying out oils, streaking products, and really play around with dry pigments. 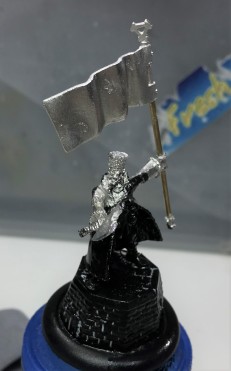 I also figured that for Warmachine, I need a third flag model to act as an objective now that three-flag scenarios are a thing again. However, I’ve already exhausted both Khador standard bearers, so it was time to do a conversion. I took a Kossite Woodsman leader, a flag from a Man-O-War, some pins and a brass tube and made myself a third unique flag. I also used the same Reaper base as my last ones, and will end up using the same painting tactic to make it look like an old bronze statue.

Fortunately, I remembered to take the picture halfway through brush priming with Reaper, so you can see the use of brass tube to replace the flagpole. Now that it’s all primed, he shouldn’t take more than a few minutes to paint through heavy use of dry-brushing and Citadel’s Nihilakh Oxide technical paint.

And now for something completely different, with the successful completion of my PZL 23 project, I’ve decided to embark on a more ambitious scale aircraft, AMG’s Me-109B in 1:48 scale. I don’t have a lot of recent experience with model aircraft kits, but this is definitely more complicated than my last work in that medium, as well as the model kits that I would build in my childhood.

This kit includes lots of advanced features in the box such as photo-etch parts, and is of a sufficiently obscure subject that I can’t imagine that very much aftermarket bling would be either necessary or even available for the more discerning modeller. 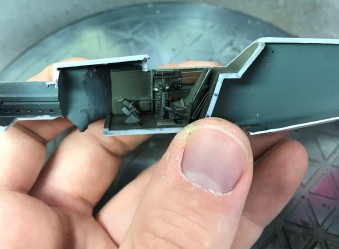 Interior, just prior to joining the two halves of the fuselage

And speaking of photo-etch, that stuff can die in a fire. For the uninitiated, photo-etch are very tiny parts, made through the use of a photographic etching process on a thin brass sheet. This allows for smaller and more detailed parts than is possible with either plastic or resin, which can be both a blessing and a curse. Further, it is not uncommon to have to bend parts into the shape required, such as with the map case on the side of the cockpit. It’s not so bad when it’s just gluing a sheet to a flat piece of plastic, but when you start having to bend it and make complex shapes, it gets real obnoxious real fast.

Fortunately, most of the photoetch is cockpit detail, and now that I’ve got the cockpit in place and by some miracle the two halves of the fuselage actually went together fairly nicely. I think the plan is going to be work on filling seams for the time being, as well as getting some of the sub-assemblies together to glue on once that is done. I’m hoping to get it together fairly quickly, as I have a unique colour scheme in mind and I’m getting antsy to start airbrushing.

I do have one more project on the go; though I shared some pictures with a few people, I’m keeping it under wraps for the moment until I’m done. Suffice it to say, it is a very expensive and very involved conversion that involves a lot of plasticard and milliput. And a lot of filing and sanding resin, which is always a task that requires care because that’s some stuff you really don’t want in your lungs.

Right now, I’ve eliminated my shelf of shame, however I have a lot of projects on the bench. I’ve been keeping them organized by using halves of boxes as trays, however it would be nice to clear off a couple and bring my WIP queue down to a more manageable level. But, on the other hand, a coworker is interested in a Warmachine demo, so I think I may pivot to that Cygnar battlebox I have kicking around. I know, it’s Cygnar, but someone has to be the bad guys.