I’ve been painting for a few years now, and lately, as I’ve been helping some newer people get into the hobby, I’ve been thinking a lot about my journey. While I don’t really have much in the way of regrets, seeing all of my previous, not so good work as a learning experience, there are a few things that, had I known about them earlier, it could have smoothed out my hobby journey. I’m sharing them here in the hopes that they will help out your hobby journey as well.

When you are just starting out, there are a lot of techniques out there that are made out to be super-advanced things that are so far beyond your abilities that you shouldn’t even try them. You might know how to base coat, wash, and dry brush, but blending, sketch style, OSL, airbrush use, and so on are things that the masters do and you aren’t ready for yet.

Let me be the first to tell you that that is nonsense. While it takes time and determined practice to master certain techniques and get to the level of the guys who compete at major national-level competitions like Crystal Brush, there aren’t a lot of techniques in this hobby that you can’t reach a level of baseline semi-competence with by watching a few youtube tutorials and trying it out. The only one of these techniques that has a real cost barrier is an airbrush, but even then, the cost of a decent basic airbrush setup pales in comparison to the rest of your army (or armies).

Second, sometimes those techniques make for a better approach. Some models and colour schemes take better to certain techniques than others. Dirty skeletons are great for washing and dry brushing; Space Marines, with their large, flat surfaces not so much. These “advanced” techniques are not just for display painters – by trying them out, even if you are just going for tabletop quality, you might find that they improve both your speed and quality and reduce the frustration that comes with using the wrong tool for a job.

When you are painting an army, particularly your first army, you will improve as you go. I did this, but as I started to improve, a worry started to creep in – was I breaking the consistency of my army by painting my new models better than my old ones?

Personally, I can think of two specific situations where I held myself back because of this, to my own detriment. First, I started out with a scheme of purple, white and silver for my warjacks, however I eventually found that the more brass bits I added, the better they looked. But, I was worried that adding additional brass would break the uniformity of my army. Turns out once I bit the bullet, my army just looked better. Second, with my basing, there were some times where I stuck to certain things longer than I should have because I was worried that if I did try new things and do better bases, then my army would look worse because the new models would clash with the old ones.

We should be conscious not to straightjacket ourselves with a need to make our armies consistent. An army is actually a good opportunity to practice and try new things. So long as there is some element of consistency in the colour scheme across all the models, your army will still look coherent even if some of your models are better painted than others.

Besides, if you are going for a best painted army award, judges often like to see progress, so that’s a plus.

A wet palette is a great invention, and you can make a rudimentary one in five minutes out a couple bucks worth of things that you probably already have at home. A sandwich container, some paper towel, and a piece of parchment paper is all you need to get started. The paper towel acts as a sponge, and when the sponge is wet and the parchment paper is placed on top,

A wet palette will help keep your paints fresh throughout a painting session, and will open up a whole world of paint mixing and different techniques that are difficult when using a traditional palette.

When I first started, I did a lot of research to figure out whether I should buy white or black primer. The theory goes that black is good because if you miss a spot it is less noticeable, but white lets you have more vibrant colours. I eventually decided on white, figuring that I just won’t miss spots.

It turns out the correct answer is “why not both” – by priming the whole model in black then spraying it from above with white primer, you can get the benefits of both. This effectively preshades the model, giving you a good starting point for shadows and highlighting, and is generally a much better starting point that all white or all black.

Acrylic paints aren’t completely opaque; they won’t cover everything in one coat. That’s why Duncan tell you to use two thin coats. That said, trying to get a perfectly smooth, opaque, coat all perfectly within the lines (including in the hard to reach areas behind shields) is often a waste of time. Rarely in miniature painting do things stay uniformly one colour; we paint on exaggerated highlights and shadows in order to make the miniature look good on the tabletop.

So, if the end product is going to have colour variation on it, why spend so much time making the initial coat perfectly smooth and opaque? if you are using the traditional approach of base, wash and dry-brush, then the model is going to be covered by washes and highlights anyways so you won’t be able to see whether the base coat was applied smoothly or not.

Also, there are techniques that utilize semi-tranparent paint to great effect. Inking over a zenithal prime can be a fast way to paint your miniatures, and covering up your zenithal with a solid, opaque layer of paint renders the preshading elements of a zenithal prime kind of pointless. Or, you could wet blend your basecoat, doing basing, highlighting and shadows all in one. There are many ways to use the not-completely-opaque nature of paint to your advantage rather than trying to fight the properties of the medium, and we are seeing even GW embrace this with the recent release of contrast paints

Regardless, if you focus less on the base coat and more on the highlights and shadows, you will not only likely have better miniatures done faster, but you will be more likely to progress as a painter and enjoy yourself if you aren’t taking an approach that feels like a frustrating paint by numbers exercise where you try to get everything perfect only to slather it in nuln oil.

Metallic paints can be annoying to use. Which is why spending the extra effort to use shiny metallic paints then hitting them with dullcote is kind of baffling to me. Sadly, it took me a long time to figure this out, so I have a large collection of dudes with dull metallics that just look grey and boring.

Just don’t do it. Metallic paints are fairly resilient by themselves, so you are probably safe to paint your metallics after you varnish. At the very least do the final highlights post-varnish to get that nice metallic glint, or try to bring some of the shine back with a brush-on gloss varnish. By simply changing the order in which you do things around a little bit, you can get much nicer metallics in little to no additional time because your final step isn’t cancelling out a lot of the hard work you did in the earlier stages.

It is often said that there is no wrong way to paint. While I agree with the sentiment, if you try to do miniature painting with a paint roller and house paint, you’re probably going to find eyeballs to be difficult and I wouldn’t be surprised to see you ragequit in frustration. I believe by starting people off on the right track and encouraging them to experiment with techniques, they can have the right tools in their toolbox to enjoy painting and be happy with their work. And, that will result in more painted models, which is why we are all here in the first place.

In recent weeks, I’ve been working on banging out my projects in progress, and the largest among those, at least in sheer model size if not painting time, is my accumulated assembled, primed Games Workshop terrain.

GW terrain is expensive but fun to assemble. For some of the industrial terrain like the sector mechanicus pieces, they can be assembled in any number of ways, allowing you to make your own creations. I build these particular terrain pieces in accordance with the instructions, with the exception of blanking out the windows on the Warscryer Citadel with plasticard so I could paint it as though it was lit from inside. Also, I used some extra pieces from the citadel to use as walls and barricades.

Painting the Warscryer Citadel and the Bad Moon Loonshrine pieces involved a large makeup brush and a lot of dry brushing straight over black primer. By just doing a whole bunch of dry brushing, going from midtone to progressively lighter colours, and allowing the black primer to show through in the recesses, base coats and washes weren’t really necessary for a majority of the model. Washes and inks were used to tint some areas and add a bit of colour variation, and some dry pigments added the final bit of weathering.

For the Derelict Factorum, I more or less followed my guide from several months ago, including doing hairspray chipping on the large tanks. To finish it off, some GW Typhus Corrosion was dabbed on the lower parts, then I sprayed on some Reaper MSP Brown Wash to make the bottom few feet of the factory look as though it has gotten dirty through millennia of dirt and flooding in the underhive. 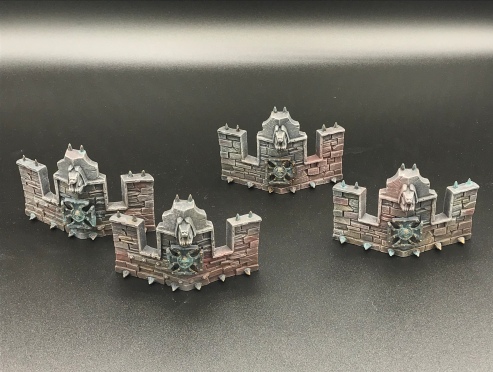 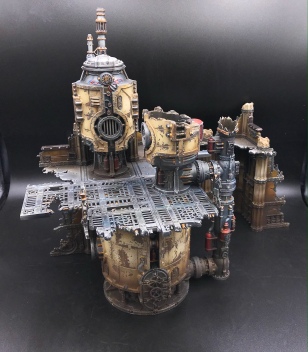 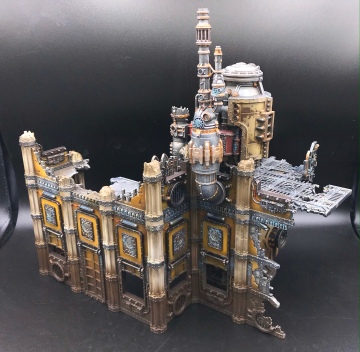 2 thoughts on “Six pieces of advice for new painters”